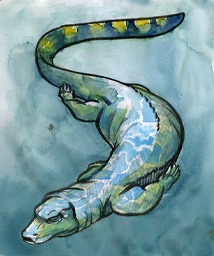 The Buru is a form of aquatic reptile, similar to a monitor lizard, thought by some to live in remote valleys of the Himalayas in northeastern India. The Buru was routinely reported throughout the 1940’s in Jiro Valley, in the state of Arunachal Pradesh, India. According to most eyewitness descriptions the Buru looked something like a 20 foot long aquatic version of the Komodo dragon. Witnesses also reported that the Buru emitted a hoarse bellowing call. The first westerner to hear about the Buru was Professor Christopher von Furer-Haimendorf in 1947, one year later, in 1948; London’s Daily Mail dispatched the Buru Expedition to the Himalayas with the hope of returning with physical evidence of the Buru’s existence.

The expedition comprised of such notable members as professional zoologist Charles Stonor and Journalist Ralph Izzard, who later wrote The Hunt for the Buru, published in 1951. The team failed to bring back solid evidence of the Buru’s existence, but did bring back enough testimony of earlier encounters with the Buru to convince cryptozoologist Bernard Heuvelmans that these unidentified monitors my have only recently become extinct, however there are still those that insist the Buru still resides in the more remote corners of the area.

According to the Apatani, a tribal group of about 60,000 people living in the Jiro Valley, when their forefathers migrated to the valley it was primarily marsh land which was populated by the Buru. The Apatani people decided to settle in the valley because of the fertility and good climate, but every now and then would run into the Buru. To prevent any lose of life the Apatani decided to drain the marsh of its water and thus eliminate the Burus. As a result the Buru all but died out but some where though to have gone underground into the springs. The last Buru was said to have been sighted by a young woman who saw it one night while she was collecting water from a spring. The young woman told her father about the Buru who the very next day had the whole village fill the spring in with stones and clay.

There are some researchers who believe that the Buru was a form of giant crocodile, which are often sometimes referred to as Buru among the Apatanis people. However both Bernard Heuvelmans and Roy Mackal regard the Buru as a large Komodo dragon like monitor lizard, to support this theory fossils of such a creature have been found in the Indian subcontinent. Heuvelmans also noted those similar creatures were reported in western India where they seemed to merge into the Iranian traditional dragon or Ahi, which is similar to the Chinese dragon. Author George Eberhart noted rumors of a similar creature in the Tigis Marshes of Iraq, called the Afa, quite possibly the same creature as the Buru and Ahi.

The Evidence There is currently no physical evidence of the Buru.

The Sightings No documented sightings of the Buru could be found at this time.

The Stats – (Where applicable)

Etymology: Apatani and Nisi (Sino-Tibetan)
word, possibly from its call.

Physical description: Roundish, elongated
body. Length, 11–14 feet. Mottled blue-black
above. Broad white band on the underside.
Head, 20 inches. One account gives it three
plates on the head, one on the top and on each
side. Eyes are close behind a flat-tipped snout.
Flat teeth, except for a single pair of large,
pointed teeth in both the upper and lower jaws.
Forked tongue. Neck, 3 feet. Three lines of
short spines run down its back and sides. Back,
18 inches wide. One account said it has legs 20
inches long with clawed feet, while another only
gave it paired lateral flanges. Round, tapering
tail 3–5 feet long and fringed at the base.

Behavior: Completely aquatic. Raises its head
out of the water occasionally. Basks in the sun
on the bank in the summer. Remains in the
mud when the swamps dry up. Makes a hoarse,
bellowing noise. Does not eat fishes. Young are
born alive in the water. Can grab a man with its
tail and drag him underwater.

Significant sightings: In 1945 and 1946, James
Phillip Mills and Charles Stonor collected descriptions
of the Buru from the Apatani people,
who are said to have killed the last of them in
their area when they were draining swamps for
rice cultivation.

In 1948, Ralph Izzard and Charles Stonor visited
a swamp in the Dafla hills near Chemgeng in
the hopes of finding a living Buru but returned
with conflicting stories from the Nisi people.

Present status: It may still be possible to find
skeletal remains of the animals in the Apatani
Valley, since the precise kill spots are still known.

Possible explanations:
(1) A surviving dinosaur of some type, suggested
by Ralph Izzard.
(2) An unknown species of Monitor lizard
(Varanus sp.), suggested by Roy Mackal.
(3) An unknown species of Crocodile (Order
Crocodylia), suggested by Tim Dinsdale.
(4) A large, swamp-dwelling Lungfish
(Order Lepidosireniformes) would explain
the Buru’s ability to keep submerged in
mud, according to Karl Shuker. The body
structure also matches a lungfish more than
a reptile. Its bellow might be caused by its
ventilating air.
(5) An unknown species of Bonytongue fish
similar to the Pirarucu (Arapaima gigas) of
South America, which also has an air bladder
fashioned into a lung.

The Buru was an aquatic reptile said to have lived in Ziro valley, a small town in the state of Arunachal Pradesh, India, at some undefined time in the past. In 1947, ProfessorChristopher von Furer-Haimendorf was the first westerner to be told about the Buru. By that time, the animals had reportedly already become extinct in the valley.

According to the Apatani elders, when their forefathers migrated to Ziro valley, the valley was primarily a marsh which was populated by Burus. The Apatani people decided to settle in the valley because of its fertility and good climate. But every now and then they would have confrontations with burus. So they decided to drain the marsh of its water and thus eliminate the Burus. Most of the Burus died because of the drainage, and many supposedly went underground into the springs.

The last Buru was said to be reported by a young woman, who sighted it in a spring one night while she was drawing water. The startled lady told her father about the incident. The next day the whole village helped fill the spring with stones and clay.

Traditionally, there has been speculation that the Buru was an unidentified member of the order crocodilia. Tellingly, crocodiles or alligators are also called "Buru" by the Apatanis. There is large population of crocodiles which live in caves in North Africa, quite far from open water, so an underground existence is not improbable for persecuted Indian crocodiles.

The mere fact that crocodilians are called "Buru" may not however be very significant, since the Buru is described with monitor-like characteristics such as an elongated neck and a forked tongue. The native name of the Komodo dragon is "Land Crocodile". BothBernard Heuvelmans.[1] and Roy Mackal regard the Buru to be a large Komodo dragon-like monitor lizard, and there are fossils of such a creature to be found in the Indian subcontinent. Heuvelmans notes similar reported creatures from Western India under the name of "jhoors" where they seem to merge into the Iranian traditional dragon or ahi (Azi Dahaka), which in Iranian art is basically a local stylistic adaptation of the Chinese dragon. George Eberhart notes rumors of a similar creature in the Tigris marshes of Iraq, called the afa, possibly the same thing as ahi. Heuvelmans also notes in his checklist of unknown animals that similar reports to the buru also come from Burma, and they might also relate to a reported lizardlike Meikong River monster.

Cryptozoologist Karl Shuker claims that the Buru was a giant lungfish noting that this provides a far more comprehensive, comparable match not only in terms of morphology but also with regard to behaviour. Shuker believes this explains the Buru's alleged ability to survive hidden at the bottom of lakes during the dry season.[2] Shuker's view admittedly does nothing to account for the various other buru-like creatures as cited in this article. It also does not account for the specified features of the long neck and forked tongue.

Retrieved from "https://new-cryptozoology.fandom.com/wiki/Buru?oldid=8093"
Community content is available under CC-BY-SA unless otherwise noted.